We checked our bees last Sunday; mainly looking for eggs. On our first check, a week previously there weren’t any, which meant we had a “virgin queen” i.e. one that hadn’t mated. We had put a queen excluder, a frame through which working bees can pass but not the queen, underneath the brood box after we had transferred them. This stops her from escaping her new home and taking the rest of the swarm with her. So, a week ago we removed it, in the hope she would go off on some mating flights and then start laying. The weather has been kind, and sure enough, when we looked again we saw larvae. Very exciting! They are very calm bees, and I love the whole process of checking the frames, the soporific buzz of the bees, the smell of wax and honey and warm sunshine on my back. It is one thing that epitomises summer for me.

We also have some sheep on our field, belonging to a local farmer. They look very cuddly, and I’ve had to tell the girls they absolutely can’t play tag with them in the hope of catching and cuddling them! 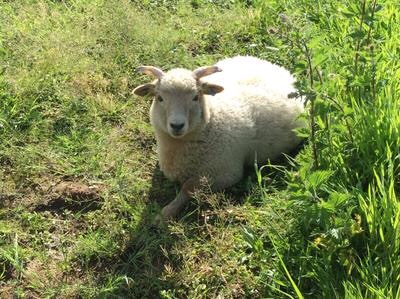 Our pigs arrived today! Only two this time, crossed between large white and saddleback, with a touch of Gloucester old spot. They arrived in the back of a truck, rather than in a trailer, and were put straight into the smaller stock fenced area. We hadn’t switched the electric fence on, and within a few minutes of snuffling round, had found an escape route, and were tearing around the rest of the field, with sheep following in their wake!

We managed to persuade one to head back in through the gate, and one of the rugby playing teenagers did a heroic dive and tackled the little black one down. It must have looked so funny, all of us charging around the field after two small pigs, with a flock of sheep just following on! Anyway, they seemed happy enough, rooting around amongst the docks and thistles! 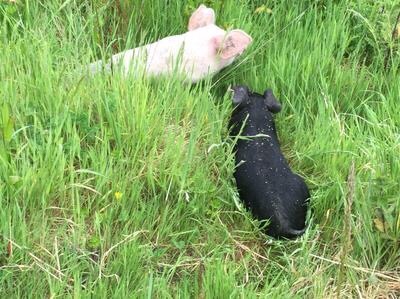 We are a group of four families this year, less than usual, with children from preschool to teens. It’s been a wonderful thing for our children to be involved in over the years. It’s been the last week before half term, so we’ve been finishing off projects and topics. For Dancing Toes this has been a small project on Ancient Greece. And Rhythm Dude has completed his first section of the physics syllabus, ready to send off to his course tutor for marking.

We went into our local town on Wednesday to look for a strimmer for me and the boys to use. And we bought pizza slices and ice creams from Lidl and sat in the sunshine. It was lovely not to feel the time pressure of exams. Just two more to go.

On Friday I dropped the boys off with home ed friends in the city, and the girls and I met up with some of their friends in the park. We do this periodically, and it works for all of us. It was another sunny day, so sitting in the park was lovely! Then, we had supper with my sister’s delightful family…energetic Boy Cousins! They are gorgeous and remind me a bit of when our boys were younger. The youngest has an interest in butterflies, sparked by the “Hungry Caterpillar” story. So, he’s been nurturing and watching some caterpillars turn into butterflies (great project…we tried to do the same last year but put the caterpillars we’d caught from our nasturtium leaves into a tadpole tank, and they escaped through the holes!). Anyway, it was time for release, and we had the fun of watching five beautiful butterflies fly away!

Beginning of half term….and yesterday we had some of the kids from youth club for a walk up the hills, and then a cookout. We cooked on my Dutch oven over a fire, and then they all roasted marsh mallows. Some of the boys played a wide game, and the rest just sat and chilled. It was a good evening.