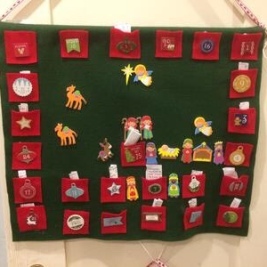 There has been rising excitement and anticipation in our household; for the girls this is for Christmas, and for the boys, the return of “Grand Tour” the Top Gear Trio’s newish series on Amazon Prime!

I love to drop our routine during Advent and just read, make, bake and play….but one of the children especially struggles when the normal structure isn’t there and behaviour takes a nose dive…So, we reach a compromise.

We start the girls’ day with normal Bible time (now the Christmas story), then English, and then an Advent or Christmas based activity and story. I read about St. Nicholas on 6 December; I’ve told them about him from the start, but it’s obviously only sunk in to Dancing Toes this year, and she’s been telling everyone “Father Christmas is real!”

The boys continue with their normal work at this stage, but Rhythm Dude joins in to listen to some of the stories. Last year I decided it was too expensive to buy four advent calendars, especially ones with both Bible verses and chocolate, and the year before I had forgotten completely….! So, last year I made these advent calendars, with Bible verses tucked inside each pocket. The children designed their own, and the felt is secured with fabric glue….one of my favourite cheats! I generally remember to put chocolate in the appropriate pocket every night. The children also have little boxes they’ve made over the years, which I also fill with a sweet or chocolate. However, there has been rather a lot of eating other people’s goodies, which I got a bit fed up with. So, to avoid temptation I now give them out…to the boys in the morning and to the girls later in the day as an incentive for good behaviour.