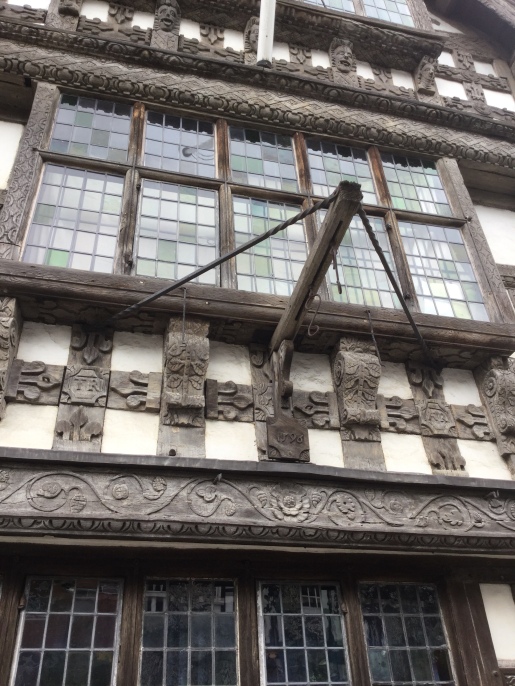 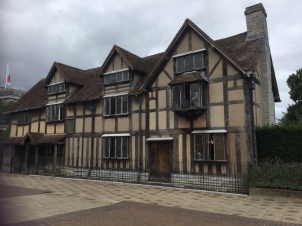 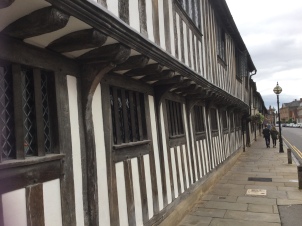 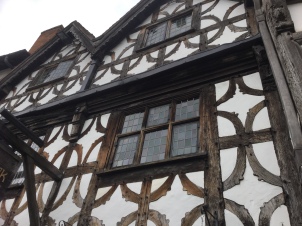 HWH, the girls and myself spent a couple of days camping at Stratford….on the racecourse! We weren’t competing with any horses at the time, so the camping itself was quite uneventful. We did, however walk into town and as well as enjoying the river, visiting the RSC theatre and having tea at an awesome 1940’s themed tea shop (The Fourteas), we did some finding  out about Shakespeare and marvelled at the wealth of Mediaeval buildings.

Shakespeare was born in 1564 in the end right house. He married Anne Hathaway and they had three children. They continued to live in Stratford, in a larger house, while William was working in London. When he died he left Anne his “second best bed and all the furniture”, his best bed presumably going to his daughter Susannah who inherited the majority of his estate. The house she and her husband, a physician, owned is still standing and very pretty, though the bed is presumably long gone.

William’s father was a glove maker and tanner and held several roles in the town, the first being Ale Taster (sounds fun, but actually responsible for weights and measures and ensuring fair pricing), and culminating in Mayor. He was thus involved in the running of the Almshouses, an impressive terrace of overhanging houses pictured on the left.

William, Anne and other members of the family are all buried at the parish church, which was the last point of our tour. Dancing Toes seemed particularly taken with this, and sent a text to to her brothers saying she had “stood at the feet of William Shakespeare”.

We discovered all this by following a free trail leaflet which we picked up and reading various plaques around the town. We’ve found this to be a good way of accumulating an overall impression of a place. There are several museums around the town which we’d like to go back and visit; good for history of that period, as well as an understanding of Shakespeare’s writings. I was most fascinated by the schoolroom which he attended, and look forward to going round it another time. The visit must have piqued Dancing Toes’ interest  as she’s been devouring our set of abridged Shakespeare stories ever since. Her knowledge will soon outshine mine.  The joy of practical learning….