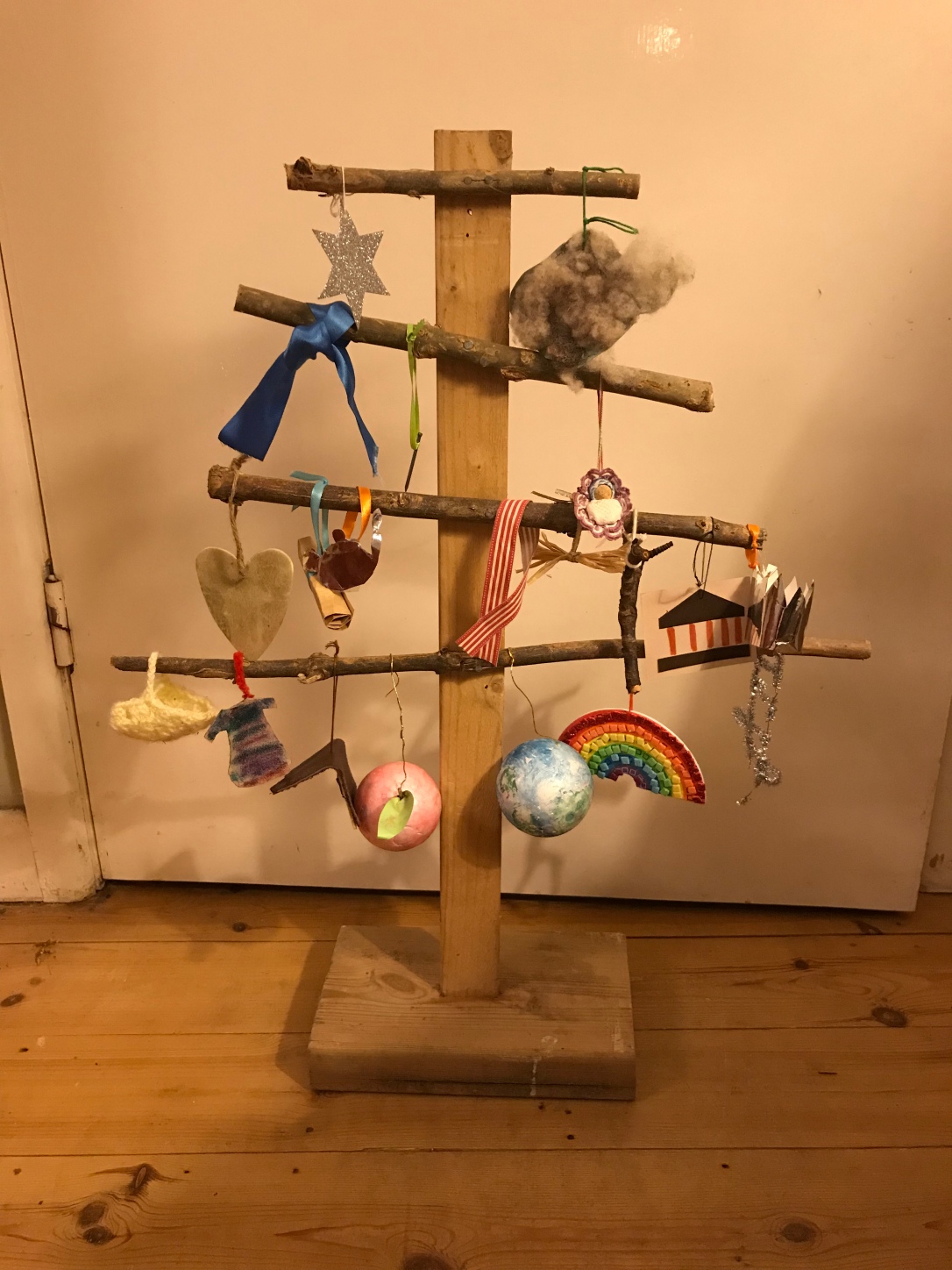 The Jesse Tree is an old tradition. Many family Bibles would have had a record of all their marriages and births, and as the generations passed, these looked a little like a tree. Hence the family tree.

Many churches too, would have displayed  Jesus’ family tree made in wood, stone or stained glass. The Bible says that the Messiah, the rescuer, would come from the family line of Jesse (King David’s Father). Hence, The Jesse Tree.

As we revisit this tradition during Advent, it reminds us not only of the historical fact of Jesus’ birth, but also that this was God’s rescue plan for our broken world.

Rhythm Dude made our Jesse Tree a year ago, and we’ve added the  decorations. A fair bit of imagination is required to link the symbol with the person!  It’s been well used this Advent as I’ve given talks with it at both our Anglican Messy Church and the carol service at our Baptist church. And it’s spent a week in each church as part of the lead up to Christmas.

Each decoration represents part of the story leading up to Jesus’ birth. We use “The Jesse Tree” by Geraldine McCaughrean, a delightful book which intertwines the Biblical accounts with the story  of a modern day carpenter and a little boy.

Each decoration represents a part of God’s rescue plan for our world.

Apple – Adam and Eve sinned…went their way, not God’s. They couldn’t be close to God anymore. From this time God began His rescue plan to win us back to Him.

Rainbow – Noah’s Ark; one day God would make a way to rescue all of us.

Tent – God promised Abraham that his descendants would be as numerous as the stars in the sky, and the whole world would be blessed through him. Jesus was a descendant of Abraham.

Ladder – Jacob had a dream of a ladder ascending from earth to heaven on which angels went up and down. We will never be able to reach up to God by our own endeavours, so one day God would come down to us.

Baby basket – Moses led Joseph’s descendants out of slavery in Egypt. One day Jesus would come to rescue us from our own sin and enable us to live in freedom.

Red ribbon – Rahab was a prostitute and yet God used her to help the Israelites spies escape from Jericho. They escaped from a the city down a red cloth, which reminds us of the blood Jesus shed for us. Rahab is in Jesus’ genealogy.

Sheaf of wheat – Ruth was also not a Jew but was was the grandmother of Jesse, who was the father of King David. God’s rescue plan is for everyone.

Sling shot – David, the first king, was from Bethlehem. The prophets foretold that the Messiah would be born in Bethlehem.

Temple – King Solomon built the temple as a place to worship God. As Christians our whole selves are a temple of the Holy Spirit.

Scroll, heart – Despite His people continually going their own way, God’s love for them didn’t stop. He sent many prophets who gave very accurate prophecies not only of what would happen to Israel and Judah, but also about the coming of the Messiah, the Rescuer.

Bee – John the Baptist. He was Jesus’ cousin and told the people to prepare their hearts for the Messiah. He lived in the desert and ate locusts and honey.

Blue ribbon – Mary was a young Jewish girl who took on the most amazing commission from God.

Nail – Joseph was a carpenter, from the family tree of David, who was also amazingly obedient to God.

Sheep – God chose humble shepherds to be the first visitors to the baby King. God’s rescue plan is for everyone, not just the rich and famous!

Star – Wise men who studied both the Jewish scriptures and astronomy knew there was something significant about the unusual star which appeared in the sky.

Baby – Jesus, the Messiah, was born fulfilling all the prophecies. By his sinless life, death and resurrection we are able to draw close to God again. He is the fulfilment of God’s rescue plan.