I love the beginning of any holidays; time stretching blissfully ahead, a blank canvas. I picked the boys up from college today, rather than them catching  the bus; I’ve lit the fire, the girls are in their pyjamas and wrapped in duvets, the boys are choosing a film for Friday night pizza and movie and several of us are coughing and sneezing away, just in time for a week off!

I always try to reflect on each half of term, not only in my homeschool planning notebook, but how we’re doing at life in general. As always, each day has its own challenges and joys. At the beginning of my mothering journey, I used to feel fairly pathetic as I knew I couldn’t do one day without my Father God’s help. Now, I think that’s a good place to be; I need to lean on Him daily as I so often feel inadequate for the tasks ahead. There have been some big changes, especially with Rhythm Dude starting college. However, God, is so faithful, and it’s generally been a good half of term, for which I’m very thankful. 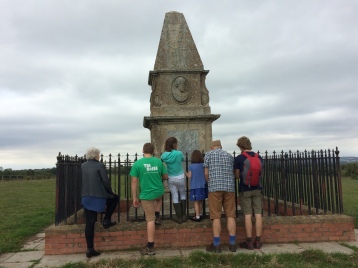 Sally Clarkson coming to stay and speaking at our home ed group was just about the best way to launch us into term. (See previous posts). It was like a massive encouragement boost to set us on our way.

It was fun going on our home ed group “not back to school walk”, and especially sweet for me for the boys to be able to come, college dates being later than school ones. We presented Rhythm Dude with his Homeschool Graduation certificate, and toasted him with Irn Bru, his chosen tipple!

Lanky Dude has been doing maths, more maths and some physics. I’ve noticed his capacity for work is expanding, he is still focused and enjoying his studies. I do think homeschool has contributed towards this. He wasn’t pushed in his early years,and so consequently he’s not bored with education. I now need to pray that he will take  time to rest and switch off. When he’s not doing maths and physics he’s been getting some exercise in, playing  the viola and preparing for their band’s first proper gig.

We have had the great privelege of hosting a few of their friends for a weekly Bible Study group. They are teens who really want to dig deeper into God’s good Word…awesome.

Rhythm Dude has done so well, sliding fairly seamlessly  into his first term in formal education. He’s enjoyed the independance of getting the bus, and it’s good to see both boys heading off together a couple of days a week. Rhythm Dude is  an early bird, so even leaving at 7.30 doesn’t seem to have bothered him. He comes home most days with a fresh piece of wood on which he’s been learning new carpentry skills. I’ve been impressed with the level of support he’s had for his dyslexia. The college seems to focus more on the individual student’s own progression, rather than herding them all through an exam system, whether this is best for them or not. This is such an answer to prayer, and has resulted in Rhythm Dude looking forward to maths and English lessons, a huge achievement in itself!

There are challenges; many of his peers have very different values form him, but he has stood up as different from the start, and they so far haven’t expected him to join in with anything he wouldn’t be comfortable with. It’s not always easy, though, and while  I continue to pray for protection and wisdom for him, he continues to build friendships. 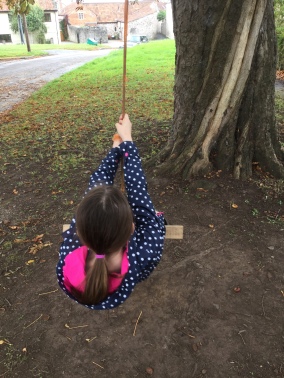 The girls and I have settled into our own rhythm. Mondays are “all in” days, with the boys at home. Thursdays they both have half days so are home for lunch, and the other three are girl days. We’ve enjoyed lots of nature walks, done a project on the moon, had lots of fun with autumn leaves, begun looking at Tudor history (the reformation mainly), met up with homeschool friends most weeks, started learning some chemistry and visited North America in our whistle stop tour of “Around the world in a year of picture books.” 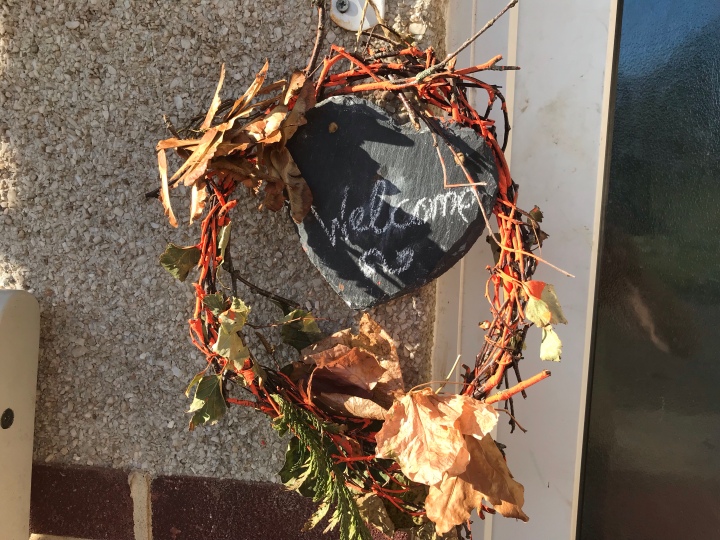 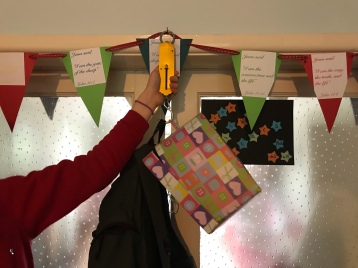 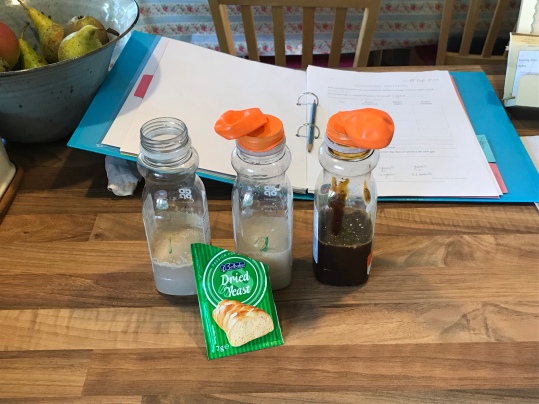 It’s been much harder settling the girls into an after lunch quiet time of reading or playing by themselves, but after several years of gently persisting, we usually do have this essential time.

Dancing Toes has done some baking, including making harvest mice rolls, and the girls often help to make soup on a Monday morning.

Fridays have developed into outing days. I think a fundamental part of educating our children is developing good family relationships; from this sure foundation so much else can be built. And, having regular times when we have space to be together, have fun and learn in a non structured way has been a highlight for us over the years. So, we’ve had some local days, swimming, visiting the library, seeing friends.

We spent a day with Granny in her Cathedral city, and while she took the girls round this beautiful place of worship, I spent a blissful time tucked away in a coffee shop, with my Bible and journal. The rain pelted down outside, lashing against the already weather worn grey mediaeval buildings, and the wind scattered the golden leaves from a walnut tree outside the window. We’d sat under that very tree with Sally Clarkson, as few weeks previously, enjoying tea in some late afternoon sunshine. When the rain let up, we all enjoyed a walk around the gardens.

In contrast we had a sun blessed day at a local National Trust property, where we met up with a newly home schooling family and while we two mums chatted (realised we’d known each other in that other, pre-children life), the girls played in the extensive grounds and explored the house. 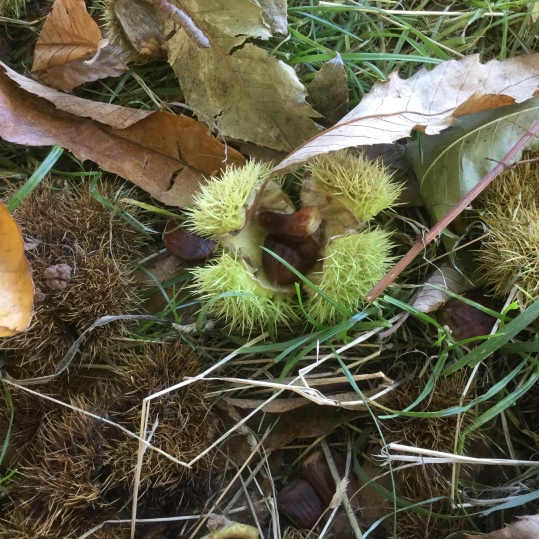 This last week, with some of our home ed group, we went aboard “The Matthew”, a reconstuction of the ship in which John Cabot sailed to America. (Post yet to come). After picnic lunches in the sunshine, we looked around the Wildlife photography exhibition with friends. 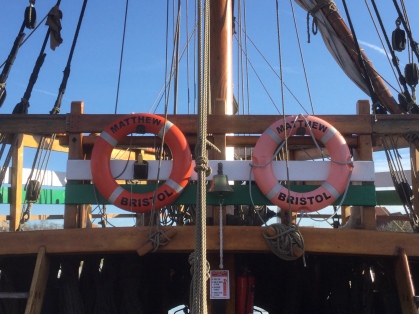 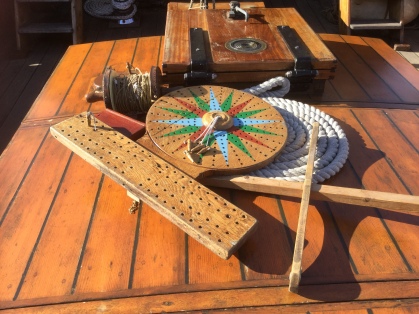 So, a busy term. Time for some rest. Highlights have been seeing Lanky Dude settle so quickly, Rhythm Dude approaching his studies with maturity, the joy of fun learning with the girls, and lots of time with friends.

Helping to plant the spuds ....
Foraging finds from our walk in the woods today. Wild garlic can be used on so many ways (some ideas in blog under foraged foods motheringthroughtheseasons.com). I’m steeping the dandelion heads in boiling water to make dandelion tea, which I may then chill and drink cold, and the violets have gone into ice cubes for a icy, crunchy snack for my youngest.
Spring foraging is beginning. Wild greens soup for lunch today (wild garlic, nettles and spinach from garden), with rolls, chutney and some elderflower cordial leftover from last year (I always leave one bottle in freezer to have at Easter time). I’m going to try to forage at least one new thing each month. I wondered about dandelion tea. Has anyone ever made it?
It’s National Siblings Day!
Easter blog post... link in bio.
Easter morning sunrise.